YOU ARE HERE: AK Tax  >  Business Advisory Services  >  How to Protect Yourself From Self-Assessment Scams

How to Protect Yourself From Self-Assessment Scams

Preparing your self-assessment tax returns can be a stressful process and is one of life’s necessary evils. Having done all that work to get your finances in order though, only to get scammed out of your hard-earned money, can be downright devastating.

The unfortunate reality is that there are plenty of opportunists looking to prey on tax-paying citizens. This happens often during the months leading up to the deadline for filing tax returns and near the middle of the year when tax rebates are processed.

In 2019, HMRC received nearly 900,000 reports from people complaining about dubious phone calls, text messages, or emails. Over 100,000 of the reports were for phone scams, and over 620,000 were for bogus tax rebates.

Thieves pretending to be from HMRC would offer tax refunds and ask for their victims’ bank details. These scammers then provide a link to a website that looks like an official government page where people enter sensitive information, which would be later used to drain bank accounts. There are also cases where fraudsters claiming they’re from HMRC make threats of arresting and sending victims to prison if they fail to pay a fake tax bill.

When HMRC Contacts You Legitimately

One big reason why people get scammed by such schemes is that HMRC does legitimately contact taxpayers through texts, phone calls, and emails for certain situations. Here are some of the more common reasons for HMRC sending you a message:

2-step verification is a security measure that requires anyone accessing your account to enter a code sent to your mobile on top of your username and password. HMRC sends this code via SMS.

HMRC sends email alerts about your annual tax summary when they are ready. Such emails only explain the contents of the summary. They do not ask for personal or financial information.

HMRC sends emails from time to time asking recipients if they would like to participate in a survey for research purposes. These could be for improving government services and processes. Like with annual tax summary emails, these messages do not ask for personal or financial information.

HMRC may send you a text requesting payment or overdue returns if you have a debt or outstanding returns. You may also receive an SMS message asking you to update your personal or business address. If deadlines are close, HMRC may also remind you to pay or submit your returns via SMS.

You will either be directed to a GOV.UK webpage or asked to call HMRC.

HMRC will send a text confirming they have received a claim, a form, or other correspondence from you. Currently, they send text confirmations for education changes for Child Benefit, PAYE or Self-Assessment complaints, and VAT DIY House building.

GOV.UK has a comprehensive breakdown of every official HMRC email, text, and phone call.

How to Avoid Getting Scammed

Going by the number of reports being filed about scams, it’s not at all unlikely for you to be on the receiving end of one. Here’s what you can do to avoid falling for a fraudulent HMRC scheme.

1. Don’t Give Your Personal or Financial Information

One major element that most HMRC official correspondence have in common is that they don’t require you to send your personal information or bank details, including your address, postcode, and Unique Taxpayer Reference. Be wary when you get a message asking for such info.

When it comes to tax rebates or refunds, HMRC never sends notifications via email.

Scam messages often have grammatical mistakes or spelling errors. These are telltale signs that they do not come from official HMRC communication lines.

Another indicator is an urgency in the tone. Texts or emails that demand you act now or within a very short time period like three days are not to be trusted. Scammers aim to pressure you into taking hasty action.

Common greetings also point toward the message being fraudulent. Scammers deploy their messages en masse, so they often say something akin to “Dear customer” or not mention your name at all.

When you get an email claiming that it’s from HMRC, take a close look at the email address. You may spot random characters that look out of place for a government address. It may also be too long, or it may not have a “.co.uk” at the end of the URL.

Some scammers try to fool you with an email address such as “@hmrc.org.uk”. If you are not sure if it’s legitimate, don’t click on any links or open any attachments from the email.

If you are directed to a website that may look like an official HMRC page, look at the URL at the top of the page. If it contains odd characters or it’s too long, leave the page. 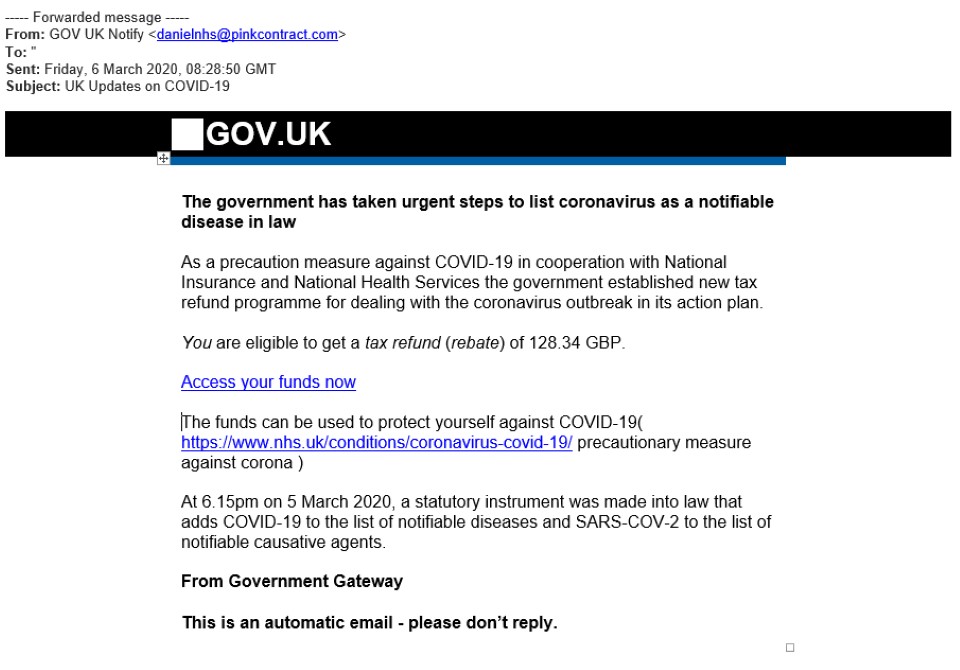 An example of an email scam. Pay closer attention to the email address. (Source: GOV.UK)

The government has provided visual examples of bogus HMRC emails and websites that you can use for reference.

The run-up to the self-assessment tax return filing deadline is when you should be at your most cautious. Scrutinise every supposed government message you receive. Forward suspicious emails to phishing@hmrc.gov.uk and suspicious texts to 60599.

To help relieve you of the burden of doing your self assessment tax return on your own, please feel free to get in touch with one of our professional accountants at AK Tax today and we’ll make sure you won’t fall prey to scammers.

Top
We use cookies to ensure that we give you the best experience on our website. If you continue to use this site we will assume that you are happy with it.Ok