YOU ARE HERE: AK Tax  >  Kent Accountants  >  Ebbsfleet Garden City to be revealed in September

Ebbsfleet Garden City to be revealed in September

So what is the state of play at Ebbsfleet Garden City? The reports are somewhat contradictory and some say the project has stalled. However, there have been recent signs that things may be on the move again. Ebbsfleet Development Corporation (EDC) is the organisation that has the power to grant planning permission and it has given some early glimpses of what the area could look like at completion.

Whilst many new towns are criticised for having satellite estates but no real city centre, the EDC is clearly determined to give the Garden City a definitive centre, despite the project originally being conceived as separate villages. 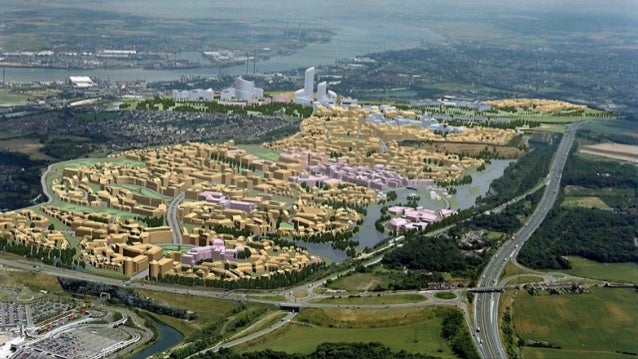 There will be 4,000 homes to start with, rising to 5,100 by April 2021. The development of the Eastern Quarry quarter, which will have 4,750 of the homes has already been agreed and the first digger should be going into the ground in April 2017.

The Northfleet Riverside quarter will be a high density, mixed use neighbourhood. This usually means a combination of workplaces, flats, shopping and leisure. These will be situated on the Thames, so if this development is thoughtfully designed, it could become a vibrant new location with a good community and commercial mix.

In addition to the homes, there will be a commercial hub and on the master plan, the Swanscombe area is defined as the major employment source. London Paramount wants to open in 2020, and having been through four consultations, is now processing feedback and undaunted, is going for consultation number five. This world-class theme park, water park, exhibition centre and creative business hub is a key provider of jobs in the new Ebbsfleet Garden City and is going to cost Paramount a reported £3.2bn.

The Garden City project has certainly had its critics. It has been noted that few homes have been delivered, and those that have been built look more like standard Barratt houses than the Swedish models that were being quoted as inspiration. However, while noting this, the Guardian reported that the Barratt Homes subsidiary which constructed some of the early houses, was receiving more than 100 enquiries for each property; a sure sign of the strong demand for houses in this area. And those properties that have been built thus far, are rising in value, together with properties in the rest of Kent.

Developers are certainly moving quickly to acquire plots in Ebbsfleet, with Taylor Wimpey the latest purchaser, picking up 539 residential plots. A new partnership, Henley Camland is going to invest £200m in the site, putting in roads and schools. Henley chief executive, Ian Rickwood, described it as a landmark acquisition, as the partnership intends to be involved in several other garden city developments.

Transport is going to be key. In fact, if the transport links are in the right places, and journey times fast enough, the demand for homes will be the major catalyst behind the project, especially given property prices in other areas of Kent.

At present, residents have a twenty five minute walk from Springhead Park to get to Ebbsfleet international station. But a new bridge has been announced, which will cut that walking time to a mere eight minutes. The bridge will span Springhead Park to the Station Access Road, and will provide two vehicle lanes, a cycle path and footpaths. A welcome result is that Countryside, which developed Springhead Park, will now speed up the building of its access road to the bridge. These types of infrastructure improvements are key in encouraging faster housing development.

The Paramount Resort will also bring road improvements, mainly in the form of a dual carriageway which will provide access from the A2 to the resort area.

With the journey from this part of Kent into the centre of London taking just eighteen minutes by high speed train, Ebbsfleet Garden City is beginning to become a logical choice for commuters. This will give companies the confidence they need to push forward with developments. Firms will feel that the projects are less risky, with robust demand for homes in the area.

The Thames Estuary Growth plan, launched on the 14th July 2016, will provide further momentum for the Garden City since it is expected to build on the projects that are already on-going in the area. One of the important aspects of this plan is its longevity; it is expected to be providing economic growth for decades to come. The plans include a £1.5bn private investment to create the London Gateway Port, a major expansion of Southend airport and a planned new crossing for the Lower Thames.

It seems that Ebbsfleet Garden City now finds itself at the centre of a number of major infrastructure and commercial development projects and as such the future of the project is looking increasingly bright.

Top
We use cookies to ensure that we give you the best experience on our website. If you continue to use this site we will assume that you are happy with it.Ok